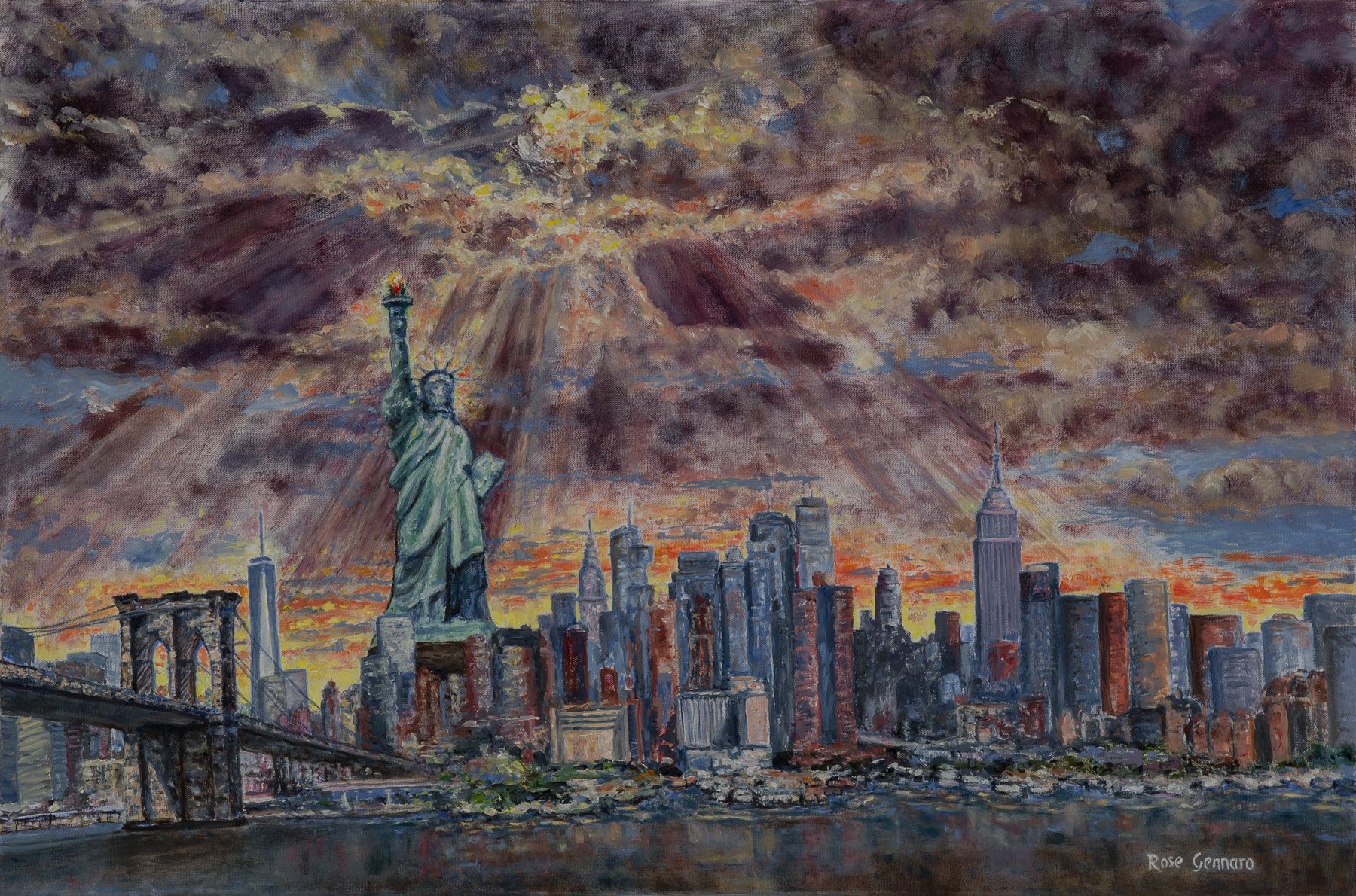 “I love New York City and was inspired by God to paint an oil painting depicting NYC during the Coronavirus. The painting represents the strength of New York and its perseverance, even during the hardest of times. I wanted this to be an inspiration to people and to elicit a feeling of hope and faith in God during this challenging time.:

As I finished the first painting – ‘In the Midst of the Storm’ to the right, I had a very strong inner sensing from God that I HAD to do a second painting of New York City depicting the virus.  God gave me a vision in my mind of the NYC skyline with the Statue of Liberty rising up behind the buildings and bigger than everything else.  The sky was to show the coronavirus, but in this painting, I visualized more light breaking through.  I used 5 photographs that I had taken myself from various trips to NYC prior to this in order to do the skyline, arranging them in such a way as to show the main buildings and icons that everyone has come to know and love.  I painted the skyline first, because I needed to see that on the canvas before I could visualize the sky.  At that point I had no idea how I was going to paint the sky to show the virus. I ended up using two photographs I had taken previously also, and then blended them into one using my intuition and sense of what I was trying to express, altering them to show my expression.  The entire painting is about what I want to SAY, which shows the coronavirus in the dark clouds, but the light of God is driving it out.   I also wanted it to represent the uncanny resilience that NYC is known for – and that it will triumph and be victorious despite the great darkness that has had it in its grip.

What was also extraordinary about this painting, was that when I painted the Statue of Liberty face, I was simply trying to duplicate the actual face of the Statue of Liberty.  After painting the first unfinished round of the statue, I was tired and went to bed.  When I woke up the next morning I looked at the face and to my shock and amazement it was the face of Jesus!  It was not intentional but I have known for a long time that God’s anointing is with me when I paint.  I already knew this was a God inspired painting, but this was more confirmation to me that He truly guides my hand.

*This painting is also part of a virtual show:  “Poughkeepsie Open Studios” 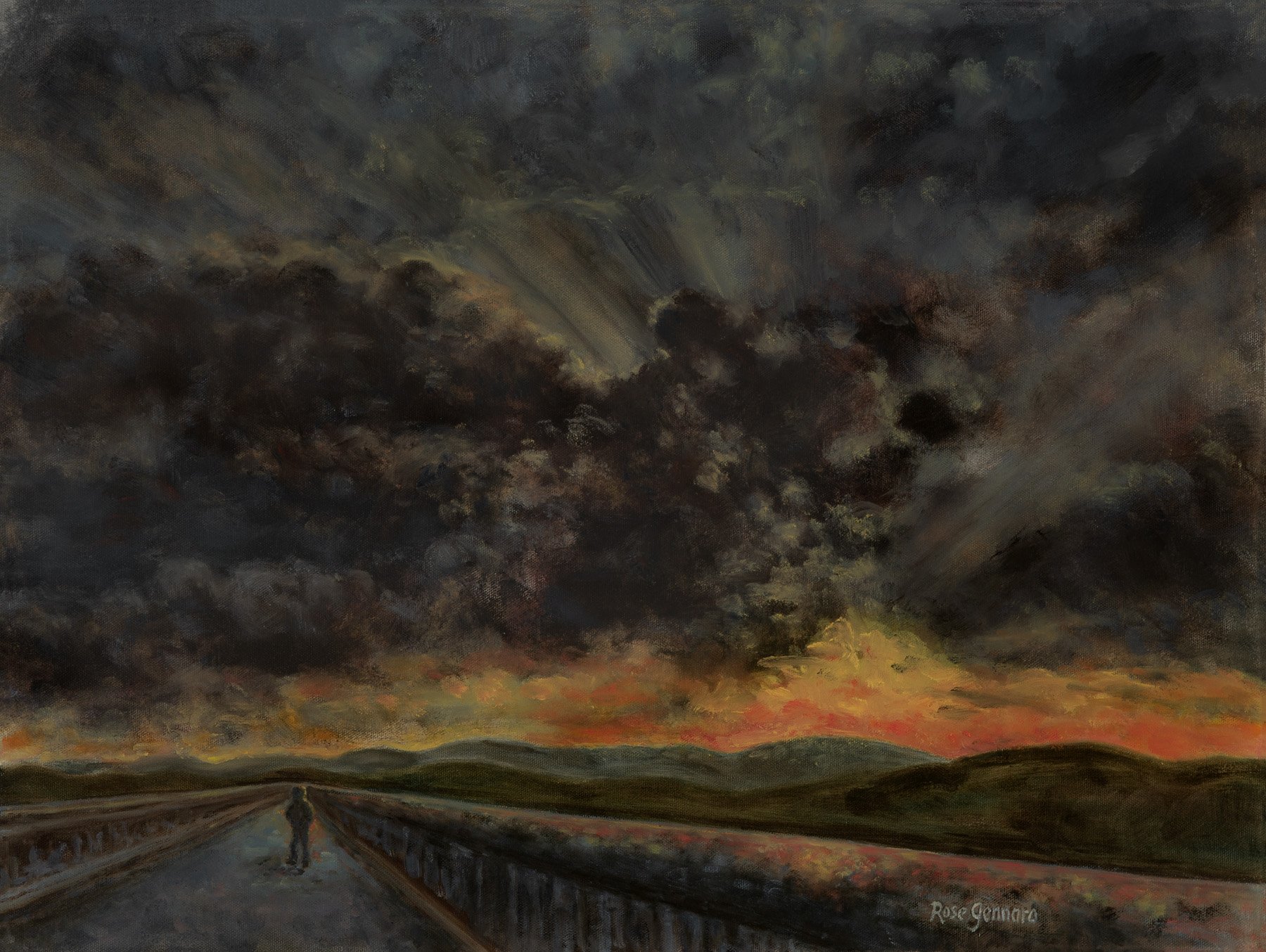 In the beginning of March 2020, I felt an extraordinarily strong urge (inspired by God) to do a painting about the Coronavirus.  At the time New York City had just become the epicenter of the virus.  This first painting I did was centered in the Hudson Valley where I live – I used the Walkway Over the Hudson in Poughkeepsie as my setting.  The sky itself is very dark and ominous, which reflected what we were all feeling and I wanted it to represent the intensity of the virus.  My purpose in painting it was to show that no matter how dark it seemed, there is hope in God.  I painted the bright light of a sunrise just beginning to show a glimmer of light and the hope we have in God – who is bigger than any darkness we go through in life, and at some point this will be over.  I painted  a solitary person walking on the Walkway to show our isolation.  The light is shining on the person again to show our hope in God who never fails us. 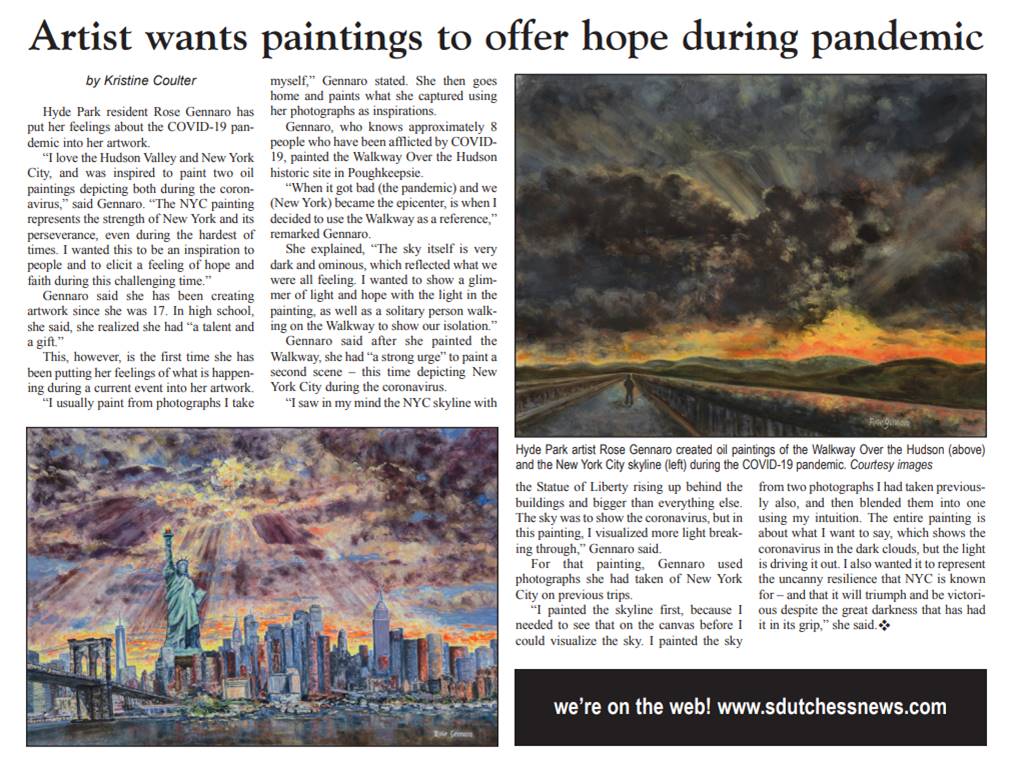