Pollepel Island, otherwise known as Bannerman Island, is a 6.5 acre island located on the Hudson River in New York. The main attraction on the island is Bannerman’s Castle, an abandoned military surplus warehouse.

Francis Bannerman VI was born in 1851 in Ireland. As a young boy, his family started a military surplus company, purchasing equipment, guns and ammunition from the Spanish and United States governments. As the business grew, Bannerman purchased Pollepel Island in 1900 to store his growing supply of military equipment. He then constructed an arsenal in the design of a castle, adorned with the legend “Bannerman Island Arsenal” in the outer wall.

The arsenal was never completed and construction ended after Bannerman died in 1918.

Over the years, numerous fires and explosions from leftover munitions, severely damaged the structure. Overgrown vegetation, along with natural weather-related destruction, has left the remaining structures in near ruins. All that is left are remnants of the outer walls.

The castle is in clear view from the Metro-North commuter train that travels North to South from Poughkeepsie to Grand Central Station in New York. Every day, hundreds of local commuters get a quick glimpse of the castle ruins as their train passes it in either direction. The island is very close to the land at this point and offers a crystal-clear view of the island.

The property is now owned by the New York State Office of Parks, Recreation and Historic Preservation. 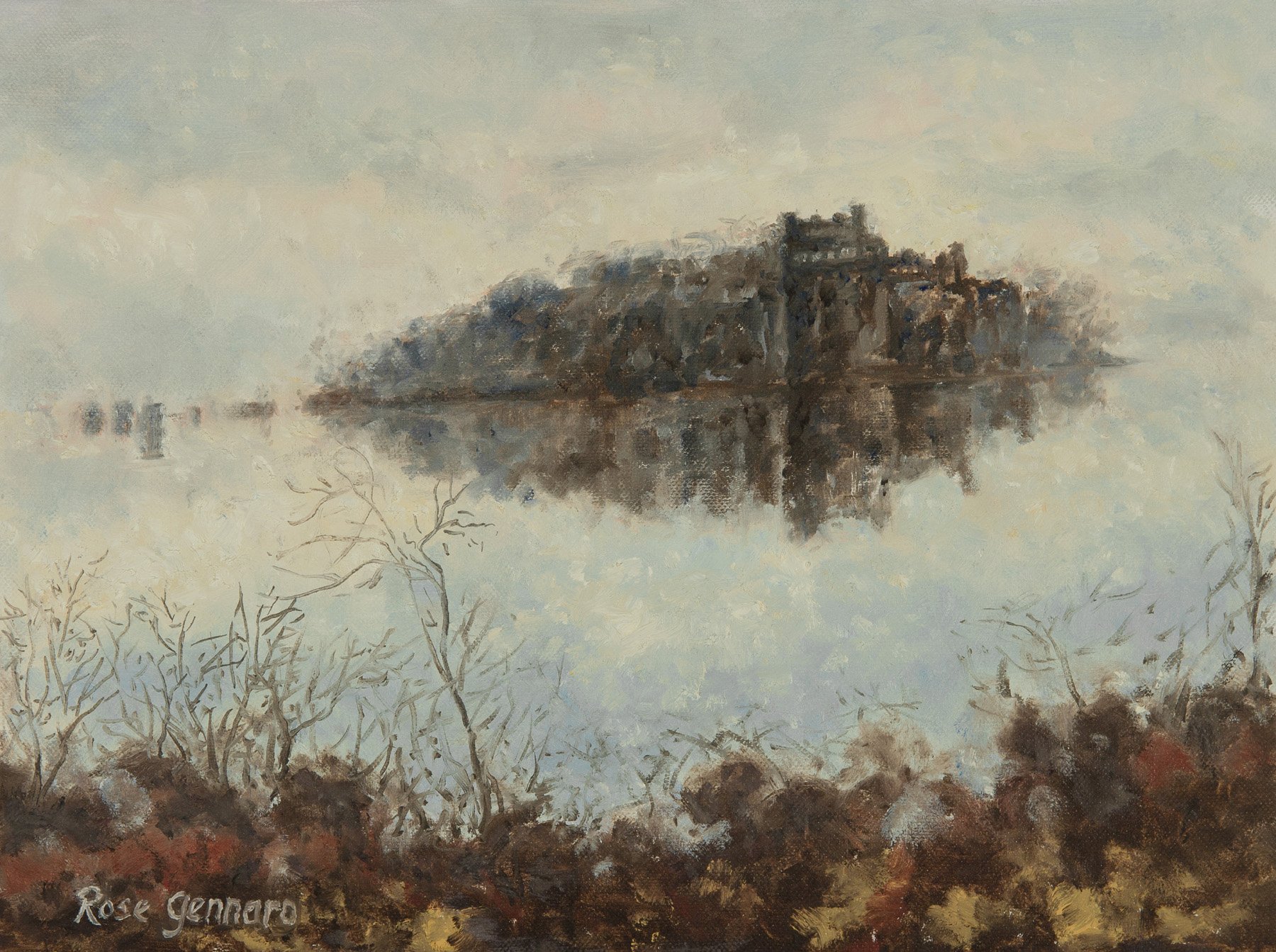 Bannerman Castle from the Train

“I painted this scene of Bannerman Island from a photograph I snapped while traveling on the Metro North train from Poughkeepsie to Grand Central Station, in New York. The photo was taken in December 2018 on a foggy day, just as the fog was starting to lift. I thought it was a stunning scene and hope you enjoy it.”
Click Here

“I’m particulary proud of this painting. I painted this beautiful shot on location at Bannerman Island for a “paintout” to benefit the island’s preservation. The original painting was sold at the auction held at the Bannerman Gallery.

Knowing that my paintings bring joy to others touches my heart and is the main reason I love to paint. I hope you enjoy this beautiful print!”

Click Here
Bannerman Island is a popular tourist attraction in the Hudson Valley. Locals and out-of-towners alike take to the river in tour boats and kayaks to view the mysterious ruins, that look like something out of the Victorian era.

Kayaks are managed by a local company and tours depart from the Cornwall Landing in Cornwall-on-the-Hudson. The trip out to the island takes about 30 minutes by kayak, with kayakers braving the often choppy waters of the Hudson River.

What’s especially interesting are the various bulkheads and causeways that emerge and submerge with the tide.

The Bannerman Castle Trust is an organization dedicated to the preservation of Bannerman Island. Guided tours, theatrical events and movie night viewings are now available to the public.

“I painted this shot from a photograph I took while kayaking on the Hudson River on my way to the island. It was a foggy day, but the view of the island from my kayak was just stunning. I hope you enjoy it as much as I did painting it!”
Click Here 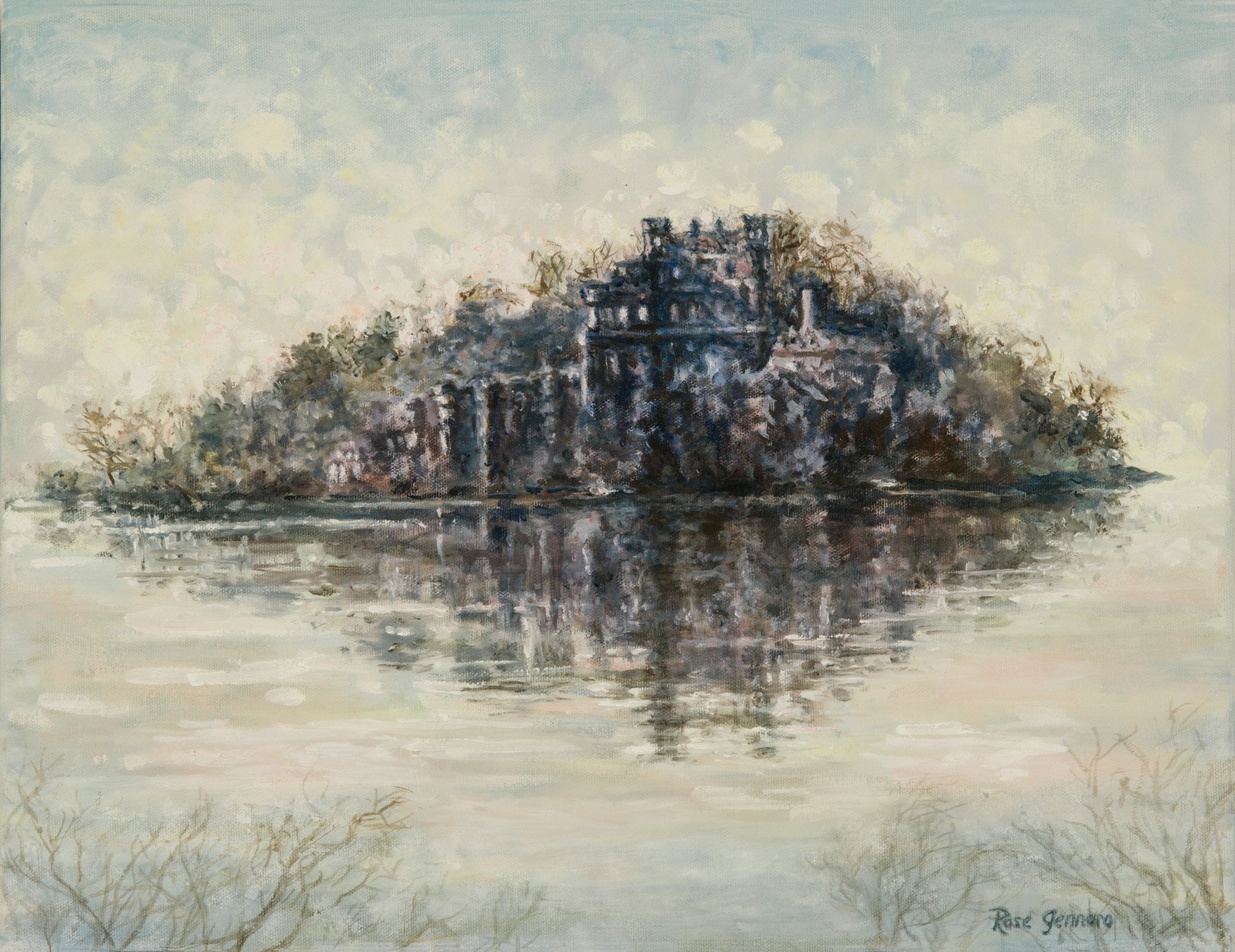 Bannerman Island in the fog

“I painted this shot from a photograph I took while riding the Metro-North commuter train to Grand Central Station. It was a foggy day, but the view of the island had a ominous tone to it. I knew I had to paint it!. I hope you enjoy it!”
Click Here
Painting pictures of Bannerman Island is a personal joy of mine. The island is so mysterious and rich in history, that it makes for an intriguing subject. The day will come when the original structure will be completely gone, so capturing it in print is very important to me.

If you are ever in the Hudson Valley area, near Newburgh, I absolutely recommend taking a tour of the island, or kayaking around it. You will be amazed at its history and unique appearance. There aren’t too may islands in the river with a castle built on it!